Everest Base Camp Trek
The Best Time to trek!

The two most popular times of the year to to trek to Everest Base Camp are Spring & Autumn.

Through my own experience and research I believe October to be the best month to visit for most people mainly because of its clearer skies and temperatures.

Higher temperatures allowed me to travel super light which was a huge priority for my Everest Base Camp Trek.

Many others agree that October is the best time to trek Everest Base Camp as it’s the busiest time of year.

To avoid the crowds at their peak but still get the best chances for great views I booked my travel dates from late September through early October 2017. This allowed me to trek without a sleeping bag! However, if you’re planning mid to late October then I’d suggest bringing a sleeping bag as there may not be enough blankets to meet the increased demand. 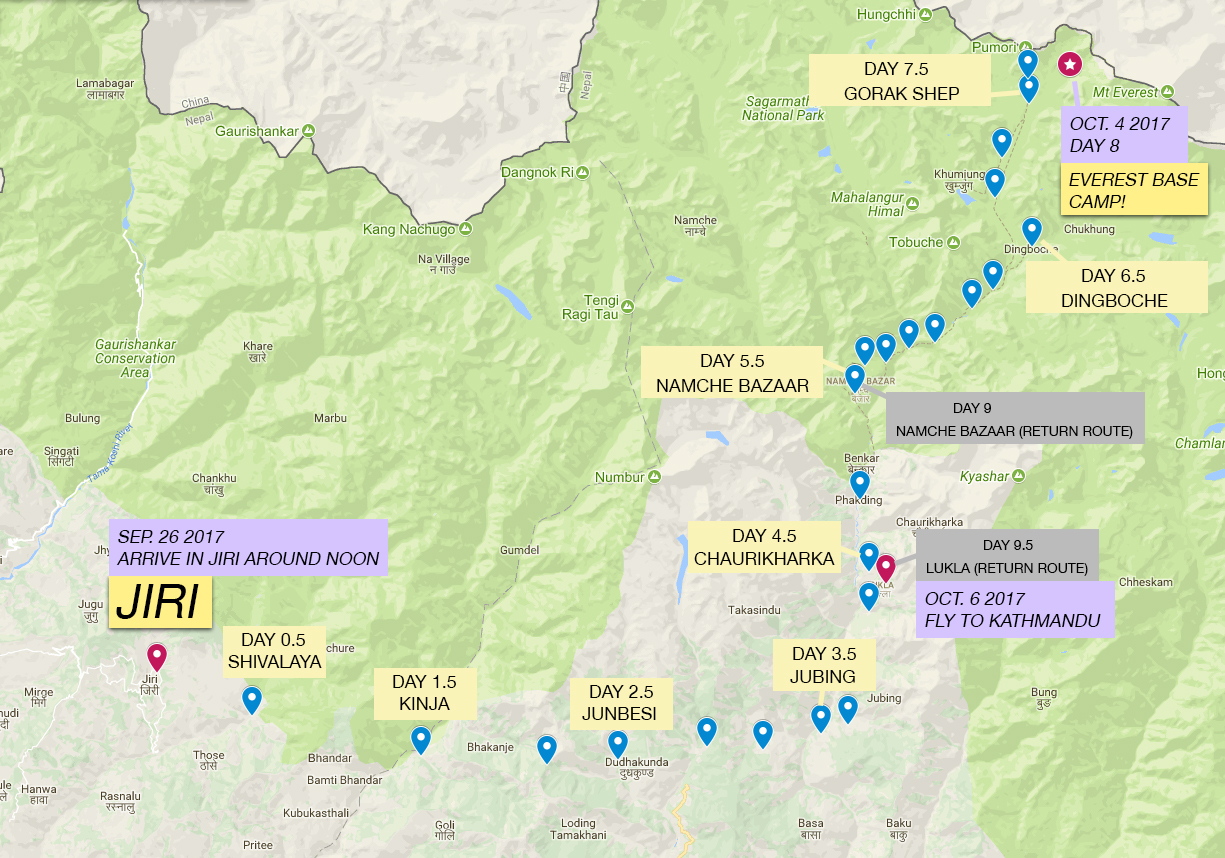 I arrived in Jiri in the afternoon of September 26th 2017 to start the Jiri to Everest Base Camp trek.

The trek from Jiri to Everest Base Camp then back to Lukla only took me 9 ½ days. I left Lukla by flight on October 6th.

If you’re trying to estimate the number of days you’ll need then please only use my timeline as a reference if you’re a seasoned endurance athlete, traveling very light, and are a bit crazy like me.

Throughout the entirety of the trek I’d say at least a day was wasted waiting out rainy conditions. Most of that happened during the earlier part of the trek in late September.

As I started getting closer to Everest Base Camp I was told by a couple people that they didn’t have good conditions. Luckily, the weather and visibility was perfect when I arrived on October 4th 2017.

Though high altitude trekking can’t be predicted due to changing weather conditions below you’ll find the average temperatures and weather patterns for the Everest Base Camp trek.

The average temperature during autumn is 15℃/59F. However, when the sun is out the temperature can reach reach around 20℃/68F. In the morning or night it may get as cold as -10℃/14F.

In the spring, there is more color on the route to Everest Base Camp. Especially because of the rhododendron and other flowers are full bloom and decorate the lower hill region.

April and May are the most popular time of spring months on the trail to Everest. During this period of time, it’s not that chilly and not that warm.

During springtime, the average temperature is 17℃. During sunny days the temperature goes up to 25℃ and it may go down -15℃ on morning and night time. You are bound to enjoy 7 hrs of sunshine on average daily.
In spring, the wind speed also drops down to 14 km/hr.
If you’re seeking more solitude March is a good option. However, early March can be bit chilly cold after that it gets warmer.

April – May weather & temperatures for Everest Base Camp trek